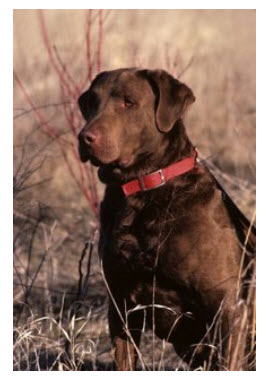 The Chesapeake Bay Retriever dog breed originated in the United States around the early 1800s. The story behind the breed is that two Newfoundlands were rescued from a sinking English vessel, and that these Newfoundland puppies were bred with the retrievers of local hunters, and hound crosses.

This inevitably lead to the creation of a resilient and talented water retriever that earned its name because of its willingness to plunge into the chilly Chesapeake Bay to retrieve ducks.

Surprisingly, Chesapeake Bay Retrievers are not very popular with pet owners. This is perplexing given that it is on the very small list of breeds originating in the United States, and that it has been AKC recognized since 1885.

These dogs are known for their affinity toward water and passion for retrieving. Although no one dog has the same personality, they are generally very calm indoors and aren’t known to be destructive.

It should be noted that Chesapeake Retrievers are often wary of strangers, have a tendency to be protective of their owners, and are just as cautious when it comes to other dogs.

One aspect pet owners love about this breed is that they rarely ever need to be washed as they have developed a water resistant coat. Their coat should be brushed once a week to help them maintain their water resistance. Exercise requirements are fulfilled by a short swimming session or a daily walk.

Primary health concerns for this retriever are canine hip dysplasia, and gastric torsion, also known as bloat. Ailments that are less prevalent include hypothyroidism and progressive retinal atrophy, which can eventually result in blindness.

One can expect their Chessie to live up to 13 years in good health.