The Doberman Pinscher dog breed was created by Louis Dobermann in Thuringen, Germany in the late 1800s. Mr. Dobermann was a tax collector that recognized he needed extra security to protect himself as he went door to door. He was thought to have initially crossed German Pinschers with German Shepherds that were later crossed with Manchester Terriers, Weimaraners, and Greyhounds.

Breeders took a special interest in the dogs, and by 1899 the modern Doberman was well established. They would make their way to America in the early 1900s, and became increasingly popular as guard dogs, and police dogs. Its peak in popularity was reached in 1977 when it was the number two breed in the United States. It has since dropped in rank but remains a popular family pet.

The Doberman is one of the most easily trained and obedient canines. It is no wonder they are popular as security, police, and military dogs. They are always on the lookout and ready to defend their family and their home. Most thoroughly enjoy regular outings with the family.

They generally do not make the best playmates for children, but this is variable as no two dogs act exactly alike. They do fine with other family pets, but may be aggressive towards dogs they do not know. If allowed to and not properly trained, some will attempt to dominate the family and attempt to control their activities.

Dobermans can become destructive if they are not challenged physically and mentally. If exercised daily they can make well mannered inside dogs. A long walk or jog should be enough to tire them out and keep them happy. 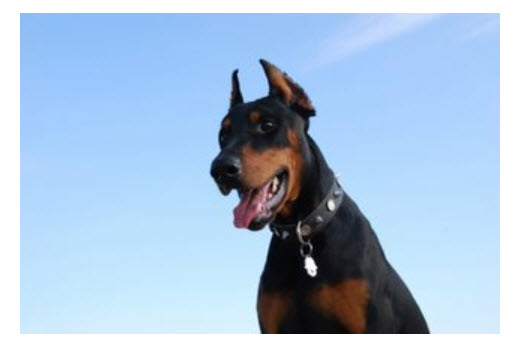 This particular breed may live outdoors in more moderate climates; however, they are much more effective at protecting the family and keeping them safe if allowed to sleep indoors.

The breed most commonly suffers from wobbler’s syndrome, and cardiomyopathy. Other less prevalent conditions associated with the breed include demodicosis, gastric torsion, osteosarcoma, and canine hip dysplasia.

During the height of their popularity albinistic white specimens began to appear in litters, and AKC registered dogs that were suspected to have a higher chance of carrying the albino gene had their registration numbers marked with the letter Z. Dogs that are albinistic may have severe health problems.

The healthiest Doberman Pinschers may live to 10-12 years of age.