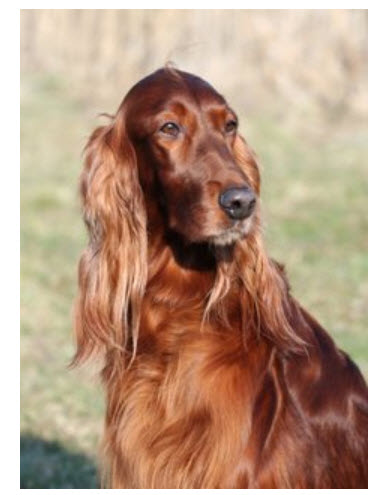 The Irish Setter dog breed, also known as the Red Setter, is said to have resulted from a mix of English and Gordon Setters, Pointers, and Spaniels in the 1700s. Interesting enough, almost all Irish Setters are related to one champion show dog by the name of Champion Palmerston.

He had sired so many pups after his great success as a show dog that virtually every member of the breed is of his bloodline. This canine had originally been bred as a bird setting and retrieving dog, but functions now primarily as a pointer. It is not one of the most popular breeds with hunters, but still retains its hunting abilities.

The Irish Setter was bred to have an abundant amount of energy in order to endure long hours hunting in the fields. This breed will need more exercise than most, otherwise it will become restless.

It may not be the best companion for small children because they tend to jump and knock them over while playing. This is one of the most friendly and loving dogs you will ever meet.

As stated above, this dog needs a lot of exercise. If it is to live indoors, you will need to set aside at least an hour a day in order to really give them a workout.

They seem to have adapted well to living outdoors if provided shelter in a warm climate; however, it is advised that they be allowed to stay inside if the weather gets too cold. Their coat should be combed three times a week

Anywhere between 12-14 years is the typical life expectancy for this breed.