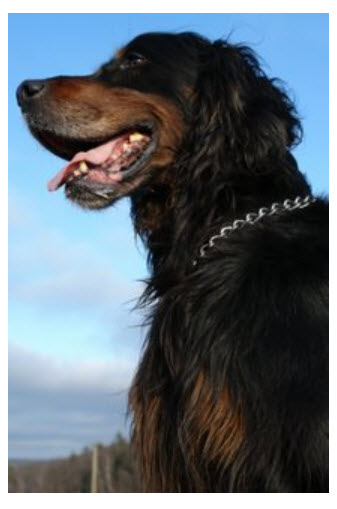 The Gordon Setter dog breed appeared first in Scotland in the 1600s, but no real effort to produce a pure bloodline was made until the 1700s. The Fourth Duke of Gordon developed a keen interest in the dog and began breeding them.

It is from his success in breeding an excellent setting dog that further solidified the notion that they were a separate breed altogether when compared to other Setters. The Gordon still has not lost its favor with hunters; however, it still remains fairly unpopular as a family pet.

The Gordon Setter is one of those dogs that will gladly go full speed all day if you needed him too. It is what they were bred to do, so it isn’t any wonder that they need vigorous daily exercise. This breed is a good match for people that are lively and always on the go.

This Setter is not the friendliest toward strangers or other dogs, but is generally accepting and tolerates any other pets you might have. Despite it not being a popular breed, it is without a doubt a family dog.

The Gordon Setter needs a lot of exercise daily, not only so that it can be calm in the house, but because they tend to become overweight. You would be fine to keep them outdoors if your climate is reasonable, but they really do need interaction with people on a regular basis. The coat will need to be brushed and combed every other day.

Being a somewhat larger and heavier breed than most Setters, it is not surprising that these dogs oftentimes fall victim to gastric torsion, and canine hip dysplasia. Other minor concerns are elbow dysplasia, hypothyroidism, cerebellar abiotrophy, and progressive retinal atrophy.

The Gordon’s lifespan is on average between 9-12 years.