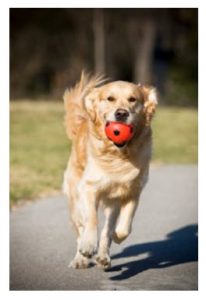 Lord Tweedmouth of England is responsible for creation of the Golden Retriever dog breed, also known as the yellow retriever, in the mid 1800s. It is said that he crossed a yellow Wavy-Coated Retriever to a Tweed Water Spaniel, whose offspring were then crossed with black retrievers, other tweed Spaniels, setters, and bloodhounds.

The breed was very successful in that it was strong, willing to swim in icy waters, and above all else gentle. It immediately became popular with hunters, and later would become one of the most celebrated pets in America.

This powerful, yet gentle breed craves human interaction and has moderate exercise needs. A prolonged game of fetch is oftentimes enough exercise for the day. Neglecting playtime makes for an unruly house pet.

Like most sporting dogs, the Golden Retriever is a very social dog and does best living indoors with the family. A brushing or combing at least twice a week is optimal to keep the coat in good shape.

Goldens will generally live upwards of 13 years when well taken care of and in good health.